World on a Plate

Exploring culture. One plate at a time. 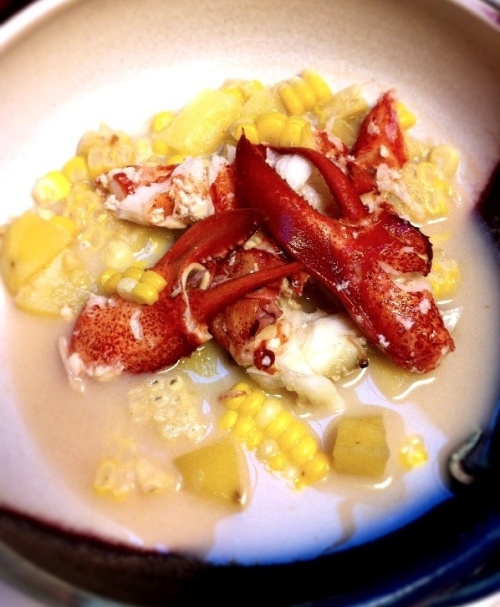 Farmers markets at this time of year can be overwhelming, in the best kind of way. Corn is in super abundance and at a very good value. I easily over bought. So what does one do with corn for many and you dine as one? Time to turn out a summer favorite of mine–corn chowder.

After steaming and removing the kernels I decided to simmer the corn ears by just covering with water and adding a few sprigs of fresh basil, garlic, and dried chili peppers for about 50-60 minutes. I portioned off enough to replace the water called for in the recipe.

Recipe is a variation from a lobster fisherman as published in Yankee Magazine. In advance, I steamed the lobster versus a par-boil and could not see using all that butter as I have plans next week! Find the master version over here. And no, I do not know why his is red and mine is not. Hmmm.

Overall a win in taste as the lobster was sweet; the broth possessed a slight heat. I froze the remaining corn.

Note: The corn stock method is from the August issue of Bon Appetit. Photo is mine and taken with the one that is never far, the i-device.

Another great morning of racing. My heart was breaking for Michael Rasmussen who had the worst day due to two crashes and having to switch out bikes four times. Today’s final top 10 represents the strength of US cycling: (aside from Armstrong) CSC’s Bobby Julich, Phonak’s Floyd Landis, Discovery’s George Hincapie and not to be overlooked is GST’s Levi Leipheimer. I love the image above. Lance the family man. The girlfriend is yapping, the kids are excited and Dad is listening to his IPOD. See, he is normal! A remarkable day–I’m getting all choked up–and I’m not sure why! Time now to get out on the bike. Tomorrow we roll in to Paris!

The Rhone-Alps region lies nestled beneath the impressive flanks of Mont Blanc, Europe’s highest peak at 15,771 feet, and a protector to the region’s borders with Switzerland and Italy. Today’s time trial, which is a loop, is held in St-Etienne, which is more of an industrial town focused on electronics and industrial engineering. It is located about 45 miles from what could arguably called the gastronomic capital of France and third largest city, Lyon. Where you’d find more of a range of dining options.

After all it was here that the three-Michelin starred chef Pierre Gagnaire went bankrupt due to "questionable financial advice, a multimillion-franc debt incurred to upgrade and expand his modest St-Etienne restaurant into a showplace worthy of three stars (it already had two, awarded in 1986). The gastronomically desolate location certainly didn’t help.

Forez is a region where gastronomy holds a significant place: fishing, hunting, and breeding are the base of a fine and tasty cuisine. Poultry, crayfish and trout enter in the preparation of many dishes.

The quality of butcher’s meat in St-Etienne is exceptional. Forez cold cuts or salaison also include (ham, meat pie and sausage. Local food specialties, such as a barabans salad prepared with dandelions and diced bacon fat; La râpée, grated raw potatoes mixed with whole eggs, cream, salt, and pepper that are then fried in oil or butter and a potato stew flavored with thyme and bay leaves called barboton. It’s here where the matefaim (hunger stopper), a thick and fried pancake is offered.  Traditionally made of rye flour and lightly salted water today it is made with wheat flour, milk, egg and sugar–an oversized crepe!

Lyon, as you might imagine offers a wider choice. as it is home to several world renowned grands chefs including Paul Bocuse, Pierre Orsi, Jean-Paul Lacome. In additional well known professional cooking schools like the Institut Vatel and Paul Bocuse School of Culinary Arts are based here. Local specialties include Andouillette de Lyon (sausage made out of pork chitterlings and marinated with white wine), Quenelles (light dumpling made of fish), and Rosette de Lyon (dry sausage made from leg of pork). Lyon is also known for regional cheeses, such as Saint Marcellin, and locally made chocolates and candies, called Coussins de Lyon (marzipan sweets shaped and decorated like cushions).

Crete, located in the Southern Aegean Sea is the fifth largest island in the Mediterranean. It’s also just about equidistant from three continents–Asia, Africa, and Europe. This rugged island is said to be the birthplace of Zeus. Visions of hiking in the White Mountains through orange-scented breezes and olive groves while listening to goats bray are starting to build. Or possibly I could squeeze in a lesson at Cooking in Crete and conquer my fear of filo.

Cretan food is uncomplicated and simple. It reflects the natural abundance found on the island–olive oil, lemons, oranges, wild greens, lentils, beans, barley, snails, and fish. Interesting food note is Crete was also the source of that catch phrase “Mediterranean diet”, derived originally from a case study in the late 1940s.

Clifford Wright has historical notes on the history of this island’s food culture. He writes:

Cretan food is actually quite simple, based on olive oil, olives, pulses and vegetables and fresh and dried fruits with very little meat and fish consumption. Crete also has deep traditions surrounding two food items that remain special on islands: bread and cheese. There are many breads, from votive breads to preserved rock-hard breads for times of famine. Like its other Mediterranean islands, Crete shares the same traditions when it comes to bread and a whole book could be written about them. So too with cheeses, many are still unnamed, just as in Corsica, called simply “cheese.” Although when pressed, Cretans will tell you that you are eating kefalotyri, or malaka or a clotted cream-like product called staka. Each of Crete’s invaders influenced the food. The ancient Greeks made sausages. The Byzantines salt and dry-cured meats and used honey in both sweet and savory dishes. With the Venetians wine production grew as did olive. Although many Cretan dishes have Italian names, they are not necessarily Italian in origin. The Turks brought the use of various spices such as sesame seeds, cumin, and coriander seed and certain other dishes such as the chicken liver and cinnamon pie called tzoulama. But there are other influences including Jewish.